With the Paris Agreement set to enter into force just before COP 22, attention is turning to how to implement the historic agreement: how do we achieve its commitments and how do we ramp up ambition over time?

For the first time, we have a global goal for climate change adaptation that is explicitly linked to progress on reducing greenhouse emissions to slow climate change. The Paris Agreement acknowledges that adaptation is a global challenge, but also emphasizes its local and sub-national dimensions that mean we need to enhance capacities at sub-national levels, and that we need to strengthen and support the efforts of local communities and indigenous peoples to respond to climate change. [i]

National Adaptation Plans (NAPs) are a key tool for advancing adaptation, providing a process and framework for assessing development needs and climate vulnerabilities. Each country’s NAP process is an opportunity to identify and prioritize adaptation options, implement them, and monitor and evaluate progress and outcomes.

Vertical integration is not a single step in the NAP process–it is an ongoing effort to ensure on the one hand that local realities are reflected in the NAP, and on the other hand that the NAP enables adaptation at sub-national levels, including the local level.

Recent decisions under the UNFCCC, notably the Cancun Agreements, identify principles which should guide countries’ implementation of their commitments. [ii]  Applying these to the NAP process highlights the importance of vertical integration.

These principles suggest that NAP processes should be: 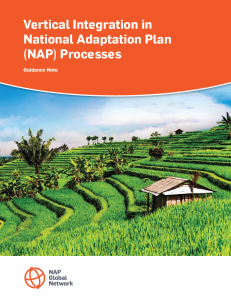 For governments that are committed to having these principles guide their NAP process, it is crucial to invest in vertical integration.

Further, from a practical point of view, there is considerable evidence of the value of locally-driven approaches to adaptation.[v] Without attention to the implications of climate change for people’s livelihoods and local development progress, efforts to promote adaptation may be ineffective, or, at worst, maladaptive.

The most effective approach to the NAP process will therefore involve a mix of top-down and bottom-up approaches, with an explicit commitment from national actors to have an inclusive and participatory NAP process.

NAP processes are iterative; adaptation efforts will be most successful if they are supported by ongoing dialogue between national and sub-national actors, and if sub-national authorities and local organizations and communities are empowered with resources and capacity for adaptation.

Angie Dazé is the lead author of the publication, Vertical Integration in National Adaptation Plan (NAP) Processes, which will be launched at COP 22 at a mini-side event on November 8, 2016.

Interested in joining the Network as a participant? Find out more.