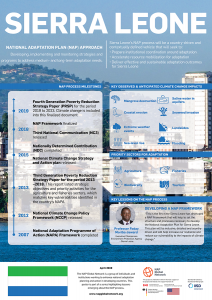 The NAP Global Network has been working with the Environmental Protection Agency in Sierra Leone since 2018 to build political support for the NAP process among decision-makers at the national and subnational levels, with the goal of increasing the integration of climate change adaptation into the country’s medium- and long-term development plans. This will be done through a series of engagement workshops to be held in Freetown and around the country.

We are also helping increase public awareness of the NAP process through the development of a NAP communications strategy, including targeted communication products and training workshops for members of the national and local media, government ministries, departments and agencies, and non-governmental organizations.